In 1965 Per-Ingvar Branemark from Sweden, was the first using implants made (titan) and designed in a way that is still the basis for implants used nowadays.
He was the first describing the contact between bone and titan the so called Osseointegration.

Implants have lead to a revolution in dentistry as they provide a possibility to use tight term dental prothesis and furthermore have lead to a paradigm change in Periodontology.

The necessity to save a tooth – heavy deseased by Periodontitis- in any case has been redeemed by the possibility to build a good tight term dental prothesis.
It is important to inform that an implant can only be integrated into a healthy denture not much affected by inflammation.

An implant residing in an oral cavity, down with Periodontitis is increasing the risk of getting Periimplantitis.
Periimplantitis leads to a loss of implants, compareable to Periodontitis and can only be treated with a Jawbone Surgery.
This surgical intervention should only be made by a dentist specialised in Periodontology and Implantology. 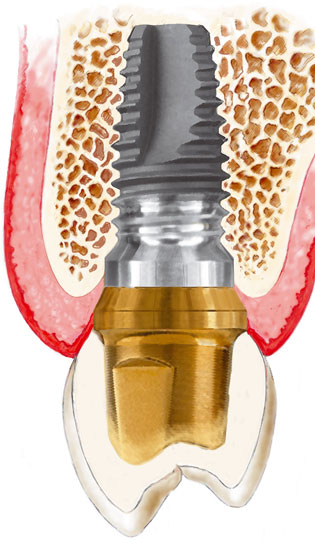